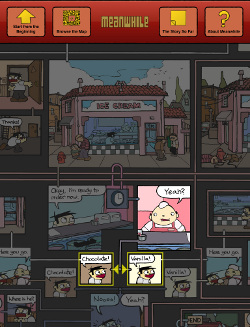 
Okay, I can't promise you will be excited. I'm sure some of you are saying, "What the heck, this is a comic book. You are not a comic book guy. You are an IF guy."

I can only reply: I picked up Meanwhile at PAX East in 2010. (My blogging cohort Jmac posted about it at the time.) I immediately fell in love with it -- a thoughtful, beautifully-designed take on the Choose-Your-Own-Adventure genre. When I got my iPad, I immediately said "That. I have to do that. In people's hands. Interactively. It will happen." 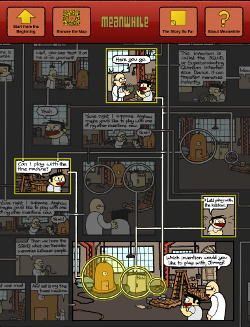 But these are generalities. What is Meanwhile?

This is of course a great story hook. But look deeper.

The basic idea of a branching narrative is context-free -- if two branches come back together, the book can't remember how you got there. Some CYOAs ask you to keep track of items or stats, but it's a hack and a nuisance. Basically, the CYOA model is poor at stories where you focus on a problem, explore it, and try many approaches. CYOA stories really want to, well, branch out and take you to new situations. (See Sam Ashwell's ongoing posts about classic CYOA books.)

(IF, of course, is for precisely this -- you explore a problem and try many solutions, most of which will fail.)

Now look in particular at Meanwhile, at what Shiga has done with the CYOA concept. Each story element is about context. The helmet lets you loop back through a character's memories and see what's happened from a different point of view. The time machine lets you loop back through events and change them. And the doomsday machine -- well, something has to kick off the plot.

So you have this problem -- the destruction of all humanity -- and multiple ways to approach it. It wedges experimentation into a CYOA model. Since it's ultimately an intellectual problem, story branches can merge together; your history is what you've learned, not what you've done. 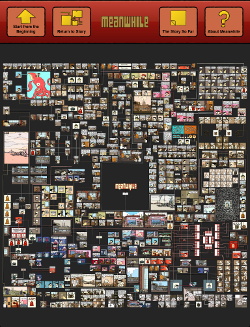 This is already cooler than 90% of the CYOA books I've seen. But because it's a branching comic, Shiga has a whole range of artistic tools that the old books never considered. Two story branches can be laid out in parallel on the page. You can't jump tracks, but you are aware of one path as you follow the other. Panels can be juxtaposed and contrasted. You can see storylines as you flip pages. Again: context. Even on your first run through the story -- which will almost certainly end badly -- you get a notion of your goals, your options, and the chances that you missed.

All of that works on the printed page. What does it gain from the dynamic, interactive form? Fluidity, I'd say. You aren't bogged down with the mechanics of page-flipping and line-tracing. You can zip forwards at a natural reading speed, and then back up easily, without the accumulation of finger-bookmarks that CYOA books invite.

Also, you can zoom all the way out.

So that's why I had to do Meanwhile for iOS.

Beyond the enthusiastic handwaving, I should probably answer some obvious questions about this.

The book is organized in pages, but this app uses a giant square layout. Did I rearrange it?

No, Jason Shiga did. I originally prototyped this as a page-turning app, following the book layout. When I pitched it to Jason, he said he loved the idea, but did I think maybe it might work better as a single giant scrolling page? Like in this photo?

Is the artwork and story identical to the book?

Almost identical. A couple of panels have been updated.

All the secret stuff is there. But the secret codes are different. If that's what you're asking. Heh.

The book has 37 full-page spreads of artwork. I originally prototyped this as a page-turning app, see... no, I've already told that story.

Does it work on the smaller iPhone screen?

Sure does. You can see less of the surroundings, so there's less context -- it's not as cool. But the experience comes through.

The web site says "Voiceover enabled". Is this really a comic book readable by the visually impaired?

Sure is. If you turn on the iOS text-to-voice mode, it will read out each panel as you reach it, and then read the choices for the next panel. You can navigate the whole thing with standard Voiceover gestures.

(Fortunately, this is a very talky comic, so I didn't have to describe a lot of action!)

Could this interface work for other comics?

Maybe. Are there any other comics out there like Meanwhile?

This interface took a lot of tuning to get right. I didn't just slap yellow squares onto Meanwhile. (There's a blog post in that design story, eventually.) So the code is very specific to this book. But I am interested in other interactive storytelling projects, and maybe this code will be adapted to something else someday.

How long will it be before Meanwhile ships?

As I've said, the delays in this project have an up side: the thing is practically finished now. There will be final design decisions, and beta-testing, and of course Apple takes a week to approve apps. But I anticipate getting this thing into the go-pipeline in early November.

But the silence is over, the project is almost over, and it will be IF time again soon.

What does that mean? Well, several things. The past year has made clear to me that I need to have several project-trains moving at the same time; and (to jump metaphorical tracks out of the frying pan) I need fingers in several pies at once.

I started out 2011 thinking that Hadean Lands had to be my big money-making breakout. That was, in truth, kind of a paralyzing notion. But it was also kind of illusory. Here I am; I've finished one project, nearly finished another, and I also have some iPad contract work lined up. (Not story-related; it's a board game port.) None of these projects now has to be The One That Succeeds And Pays My Rent Forever. But they all could be. (Okay, not My Secret Hideout, probably.)

Thus, I retreat from a promise: I will not be working on IF full-time for the rest of this year, or next year. I apologize for that. But I will be working on IF again, and that includes Hadean Lands.

The iOS interpreter engine is in better shape than the HL game design. So it is likely that I will ship some of my old IF as iOS apps before HL goes out the door. I'll start with The Dreamhold, probably -- as a free app. (I'm not going to charge money for a game that's been free since 2004. Plus, it's already included in iPhone Frotz. Plus, one goal is to stress-test the iOS interpreter code. Gonna get a lot more coverage with free apps than with cashy ones.)

So, you'll see me release other work -- and other IF work -- before Hadean Lands is done. I regret that but I don't apologize; that's the way my life is going to work, if it works at all.

What I can tell you is this: by the time Meanwhile ships, Hadean Lands will be my "work on this every day" project. That doesn't mean it will be my first priority on any given day, but there will be steady progress. Sometimes I get wrapped up on a project and crunch on it for weeks; Meanwhile was like that. But the steady progress works whether I'm obsessed or not.

(What's my current "work on this every day" project? I do have one. Shall I say, River-and-Swamp design work? But it's not a high-priority project; it will probably be shelved next week, until either the board game or at least one IF project reaches fruition.)

In the long term, I hope to offer you an ever-growing tally of interesting projects across the game and narrative domain. And I hope that, in aggregate, they pay my rent.

Thanks! I had never heard of this guy before. Perhaps I will shoot him some email.