A preview of My Secret Hideout (plus catching up)

I already mentioned this on Twitter and then (welcome to the new world) my Google+ stream. But you folks signed up for news, and news I owe you. So here's a little more detail.


My Secret Hideout is an interactive text toy for the iPad. You build a little tree on the right half of the screen. As you do, the left half displays a description of your secret treehouse fort. Every change you make to the tree causes the text to evolve. The larger your tree, the larger your treehouse gets. 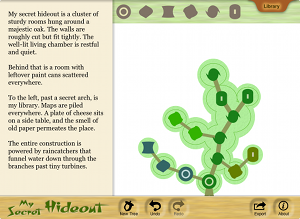 (If this screenshot doesn't work for you, scroll down -- I've copied the sample text at the bottom of this post.)

This is not a game. It's not really a construction kit either. You don't decide what rooms and elements go into your treehouse; you can only make changes and watch the variations. But I think that has its own charm. It's a toy, and a toy should be discovered through play. Just like IF, really -- there is no menu of treehouse elements, so you will keep finding new ones as you explore.

I also think that the tree is a pretty good toy on its own. Dragging around the leaves is fun! The tree reacts as you play with it; it's subtle animation, but it adds a lot of bounce and snap and physicality to the interface. I spent a lot of time making sure that was satisfying.

My Secret Hideout is just about finished. I need to add another couple of room options, and polish the usual list of UI edges which nobody but me will ever care about. I've said that I intend to ship it -- at least into Apple's hands, for approval -- by Labor Day (Sept 5). I'm still good with that deadline.

This thing has a wacky history. The concept started out as "The Folding Book of Fairy Tales". Imagine a picture book, but rather than turning pages, you fold them, bringing together different elements and forming new shapes. Wacky, eh? I have no idea where that goes. I would like to get back to that someday.

Well, I didn't have a picture book ready to go, but I started writing some paper-folding code. You Twitter followers saw me starting to rant and mutter about origami a couple of months ago. I got that working pretty well, too. Then I pulled out this idea of a fantasy world of procedurally-generated text. I put them together, and presto: 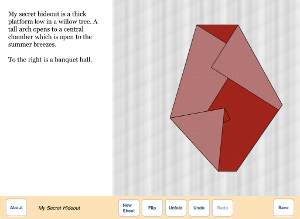 That worked nicely. But I wasn't satisfied with it. Playing with paper-folding is fun, but it feels destructive -- or rather, it feels bounded. You fold the paper, and it gets smaller and smaller, until you have this little angular spitball that won't fold any more. (Memory limits, you know, even with infinitely thin paper.) I don't have a full origami simulator, so it's not like you can make a crane. And it just didn't seem to fit the treehouse theme.

So I tossed all that paper-folding code off to the side. (I will definitely do something with it someday, even if it's not the Folding Book of Fairy Tales.) I started over with this tree-building toy... and that worked much better.

Now the elephant-in-the-treehouse question. My Secret Hideout is obviously not a text adventure. (Although I've brought some of my text-adventure skills to bear on the descriptions.) Where is Hadean Lands in all of this?

For that answer, let's go back to February, when I started prototyping what I am still referring to as Secret Project M37. I was pounding away on HL design documents and iOS interpreter code. But I knew that would be a long process of pounding, and I wanted a relatively fast project that I could crank out and start making some money. (And iOS dev credibility.)

I created a prototype for M37. It looked good. I got excited and worked on it for a couple of months (while still working on IF code).

Then M37 got bogged down in one of those annoying delays. As a software developer I want to imagine that any problem can be solved by sitting down and hacking all night -- but that's false. This wasn't a technical issue, it wasn't anybody being incompetent, it was just paperwork that was slow. (I won't go into the whole story, because it doesn't matter.)

So that was frustrating. If I were a perfect person, I would have used the delay to push Hadean Lands forward. But I got stuck on the idea of "fast project, crank out, make some money". So I pulled out the origami idea and the procedural text idea and threw together My Secret Hideout.

I started that at the beginning of June. So it's looking like a "fast project" for me is three months -- except that, remember, I wrote a whole origami library and then took it out. So really two months. (And now I have an origami library in reserve.) That's pretty good; that gives me confidence that I can keep an iOS dev cycle going.

After I ship Hideout, I will be concentrating on M37, because it too is just about finished. (And the paperwork is just about settled...) Even though M37 isn't IF either, I promise you will be excited and you will understand why I made time for it this past spring.

Once both of those are out the door, it will be IF time again. I realize that you all have extended your faith to me, and I've been less stringently focused on Hadean Lands than I could have been. I beg your further indulgence. It will all come together.

Here's the text from the sample screenshot, in non-screenshot form:

My secret hideout is a cluster of sturdy rooms hung around a majestic oak. The walls are roughly cut but fit tightly. The well-lit living chamber is restful and quiet.

Behind that is a room with leftover paint cans scattered everywhere.

To the left, past a secret arch, is my library. Maps are piled everywhere. A plate of cheese sits on a side table, and the smell of old paper permeates the place.

The entire construction is powered by raincatchers that funnel water down through the branches past tiny turbines.

And just for kicks, here's a second one:

My secret hideout is a meshwork of tree branches, low in an elm. The walls flutter gently in the wind; vines weave through them. The uneven sleeping chamber is restful and quiet.

The treehouse is easily defensible. A ladder of heavy boards runs down the tree. I can also parachute out if necessary.