Quite by coincidence, all the IF news of the month has piled up into a 48-hour narrative train wreck. No, that's a morbid metaphor. A 48-hour Volkswagen full of news clowns? I don't think it's getting any better. Skip the metaphor. 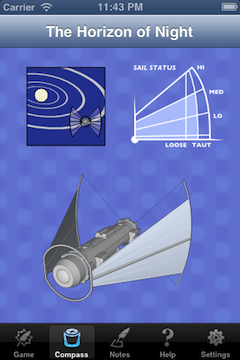 Hoist Sail for the Heliopause and Home, my space-opera fairy tale, now joins Shade in the iOS App Store. As with Shade, I've added some illustrations for this iOS port. The art doesn't change the game, but it might make the important aspects of the ship's status easier to grasp.

If you're not familiar with Heliopause, it's a tiny little game that I wrote for @party a couple of years ago. It was inspired by my desire to stretch the traditional time-and-space scale of interactive fiction -- to deal with solar systems and centuries, rather than hand-held objects and minutes. It was also inspired by old pulp and New Wave sci-fi. (Count the literary references!)

Myrmidal is the queen of the bright worlds, and you've walked her million cities beneath her sky and beyond it. Myrmidal laughs and Myrmidal dances; they say no one weeps on Myrmidal, except for moments on the stage.

But even on Myrmidal the sun rises and sets, and the music grows tinny and harsh when you weary of dancing. Your best stories and your best lies draw the same fond laughter. This morning you decide to rise to the docks, and rouse your Horizon of Night from her sleep, and raise her sails. Somewhere are worlds you have never seen. And if your friends miss you at the dance, they can tell you so when you return.

Related to this note, a new interview with me at Gamasutra, posted (and hosted) by Leigh Alexander. We talk about Shade, Heliopause, and how I think IF works on the small-and-touchy screen. 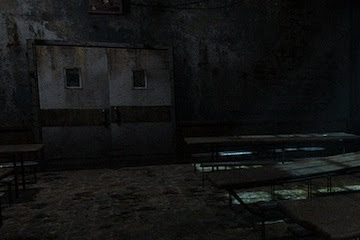 Over on the purely graphical end of the adventure-game spectrum, I'll note the release of Dagon, a framework for building first-person anamorphic-panning games. (This is the UI style of Myst 3, and of course many other games.)

Dagon is the framework build by Agustín Cordes for his upcoming game Asylum. You may remember the Asylum teaser demo from last summer; if not, it's worth a look. The Dagon scripts for the teaser are included with the download, so you can see how the system works.

Asylum is currently in the middle of a Kickstarter push -- they're 75% of the way to their (ambitious) goal. Kudos to Agustín for pushing out the open-source framework before the game's funding is assured. I hope it helps him hit the mark.

Next on the news list: Emily Short's secret project, which she and Richard Evans have been working on since before they got themselves acquired by Linden Labs.

Versu is an engine for choice-based, conversation-focussed narrative fiction. It is currently available as an iPad app; support for more platforms is planned. What you get right now is a free download with a tutorial, a short adaptation of a scene from Pride and Prejudice, and a longer ("30-45 minute") Gothic-ish story. For $5, you can buy an additional story about a polite family dinner party that turns to... well, I shouldn't spoil it, should I?

I started to write about this thing, but it grew into a full-on review. So I am cutting that loose to be its own post. Up next on the Gameshelf! 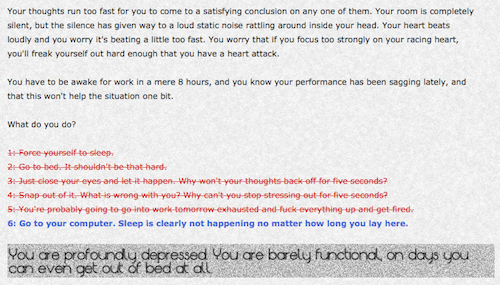 You are a normal person, with a normal job, and a normal girlfriend, and a -- perhaps normal -- lousy feedback loop between your thoughts, your habits, and your biochemistry. Which is to say: depression. You play through a few months of your life, with simple illustrations and a placid, sombre soundtrack. Your decisions all suck.

This is the sort of bleed-on-the-page writing (and game design) which would be mawkishly simplistic if it weren't real, but it is real. You can smell that, even if you don't have depressive tendencies yourself. (I do, as anyone could tell you who knows my preference for writing code in a room with the shades drawn. All week.) If you don't believe that some people are like this, you need to play the game, and pay attention.

Depression Quest is built on Twine. It's exactly the sort of simple graph-based plot that Versu isn't. (Whoops! You haven't read the Versu post yet. Context ordering failure! Well, we'll get back to it.) Look: DQ isn't about its gameplay. The mechanics are simplistic and limiting, and that's the point, right? To underscore the point, half the options are blocked off in any given scene. This has been done before (Rameses is famous in the IF community), but it still works.

Several months ago I played Papo & Yo, which is a similarly honest game. Anna Anthropy's Dys4ia is also coming up in many people's comparisons. Notice how different all of those games are?

I hope nobody thinks that this is "dreary games about life sucking". (We've got the regular game industry for that, right? From Space Invaders to Missile Command, and then an infinity of games about war?) No: this is people communicating their lives, and choosing the interactive medias to do it. We must have this if anything called "game design" is to have a lasting impact. That is all.

I'm not sure how much more I want to say about Depression Quest. It is a free browser-based game. The author is accepting pay-what-you-want donations, of which a portion go to iFred, a education and research organization. (I had trouble with the donation button, so I dropped money directly on iFred. Zoe, if we ever meet up in real life, I owe you a beverage.)

Rather than waft more of my own sentiments around, I will just quote from the game's introduction:

Depression Quest is a game that deals with living with depression in a very literal way. This game is not meant to be a fun or lighthearted experience. If you are currently suffering from the illness and are easily triggered, please be aware that this game uses stark depictions of people in very dark places. If you are suicidal, please stop playing this game and visit this link to talk to someone. [...]

It goes without saying that because of the very nature of depression, it is experienced differently by every person who suffers from it. We aren't trying to say that this is the "best" or "most accurate" representation, merely that this is an amalgamation of the experiences of the developers and several people close to them. Many of the following encounters deal with issues such as therapy, medication, handling a love life, and reaching out to support networks. In reality, less than half of depression sufferers actually seek treatment, for reasons such as lack of money, perceived personal failing, or public stigma. [...]

We've written it this way so that we can focus specifically on the illness, which becomes more and more difficult to deal with as the person who has it is less and less well-off.