I was at the Boston Festival of Independent Games and it was pretty darn awesome. 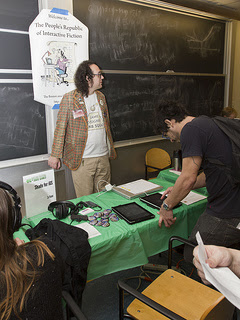 I had Shade and Meanwhile sitting out on iPads, and people played both of them! It wasn't literally eight straight hours of IF demoing -- there were gaps -- but it's not like people ignored the IF in favor of the interactive comic, either. Several people played a significant fraction of Shade. One dedicated player ran through the whole thing. (With some nudges from me. The ending requires a certain degree of relaxed experimentation and persistence, which isn't easy to maintain in a crowded demo room.)

(Yes, I wrote down a bunch of synonyms and action phrasings that I forgot to implement back in 2000. I will add them to the game when the iOS version comes out. User testing!)

Naturally I had a stack of IF cards to hand out to Shade players. I also got to show off the XYZZY Award I won for it, way back. And the puzzle-key I designed for the MakerBot promo game. (In the photo, the puzzle-key is sitting on top of the XYZZY. Sorry, I would have arranged that better if I'd known. Also I'd have been looking at the camera.)

Meanwhile was also popular, of course. It demos very well -- hand it to someone, and they'll get the idea instantly.

(I also had Pocket Storm running on an iPod. You can see the headphones in the photo, but nobody picked them up. Oh well. The good news is, I now know that an iPod can run PS for eight hours without recharging, even with the screen set to stay lit.)


I did not get much chance to look around the rest of the show, because I was standing and demoing for eight hours. That laptop in front of me? Didn't open it once. I thought I would be able to work on some HL code during slack time in the show. Ha ha.

But I could see some very nifty first-person 3D exploration games running across the room, and hear the shrieks of Conway's Inferno. (All my puzzle friends noted Conway's Inferno as a clear puzzle hit; I agree. When the iOS version ships, buy it.) And I got a few minutes to chat with Jason Scott before he showed his movie. I hear Peter Molyneux dropped by, but if I saw him, I didn't know it.

I did not win one of the show awards, which were voted by the crowds. (Didn't expect to.) You can see Shade got a string of yellow dots -- votes for "best narrative" -- although, to be fair, I think a couple of people were voting for Meanwhile. I don't see the winner list posted, but I know that the Best Narrative trophy went to Resonance, so congrats to Wadjet Eye.

Conclusion: this festival was a big success. It was an excellent way for crazy small-time developers like me to show off games, talk to people, and generally demonstrate our existence. Many people tried my games; more people watched the documentaries. I pushed the PR-IF link on anybody who expressed an interest in IF, so I expect we'll have a packed meeting in October. (Not yet scheduled, sorry.)

The show will happen again; it will be bigger next year. If you're a game maker in the New England area, and you're not big enough to set up a gigantic booth at PAX or GDC, you want to be at BostonFIG in 2013. I will be.

Oh, I nearly forgot the weird punchline: the Governor has proclaimed September 22 to be Independent Game Development Day in Massachusetts. I have no idea what sort of chain of events leads these things to happen, but I was there.

Bonus photo of me in a Computerworld post! (Thanks Ken Gagne.)