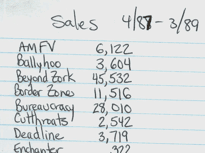 It certainly is true that you can take a hobby that you love and try to turn it into a business. In that case, it may not be important to you if you make a profit or not. However, if your intention is to go into business and make a profit, you must produce a product or service that is in demand by enough potential customers so that you can make a profit.
Andrew Plotkin (May 24, 2010 at 11:41 AM):

Hey, that was actually coherent and on-topic! Well done.