A plenitude of alchemical domains

This weekend was Emily Short's Seltani jam, which was a pleasant morning hangout and went off without a hitch.
(I'm writing this a week in advance, by way the way. If it went off with a hitch, I'm going to have did some hasty editing last night!) (Nope, was fine. Low on jam content, but plenty of people interested in the tour.)
My contribution was Mutuai Minor. This was a fix-up of two unrelated interaction concepts:
At this point you fix me with a Vulcan eyebrow and say, "Really, Zarf, alchemy? Haven't you done alchemy to death?" Yes! I have done it to death, and yet I keep finding new and interesting angles. Or new angles, anyway. To convince you that they're interesting, I'm going to compare three different approaches.
(This post will have partial spoilers for The Dreamhold, Hadean Lands, and the alchemy lab in Mutuai Minor.)
My first alchemy game was The Dreamhold (2004). The game involves several sorts of magic, but towards the end there's an alchemy lab:

You stand in a chamber built of massive squared stones. The only exit is a plain doorway in the north wall. Shelves line the east side of the room; the opposite wall is painted with an elaborate mural. Between them, a worktable -- a single heavy granite slab, cluttered with the tools of your work.
In the center of the worktable is a complex apparatus of mirrors and lenses. The table also contains an empty flask, a wooden basket, a leaden jar, and a scrap of paper.
> READ PAPER
You have the formulation of the necessary ink scrawled here: "Winter lithontree resin, and sea-blood corundum -- equal by mass -- combine -- ensolve by exposure to (2 pulses) month-aged noonlight." Easy enough to repeat. The hard part was gathering those substances.

It turns out that these three ingredients are the entire stock of the lab. You have lumps of golden resin, a jar of blue corundum dust, and a machine that will zap your mixture with a pulse of light.
(Historical trivia: I lifted the blue corundum, blood of the sea, from Meredith Ann Pierce's A Gathering of Gargoyles. Soaking ingredients in moonlight or noonlight is a trick from Diane Duane's Young Wizards series.)
Of course, the game leaves you to experiment. Once you've played around for a while, you figure out the two big rules:
Because it's based on mixtures, drawing a diagram is a difficult. But, to simplify somewhat, the important operations are "light", "add dust and then light", "add resin and then light." This gives you a fairly simple diagram: 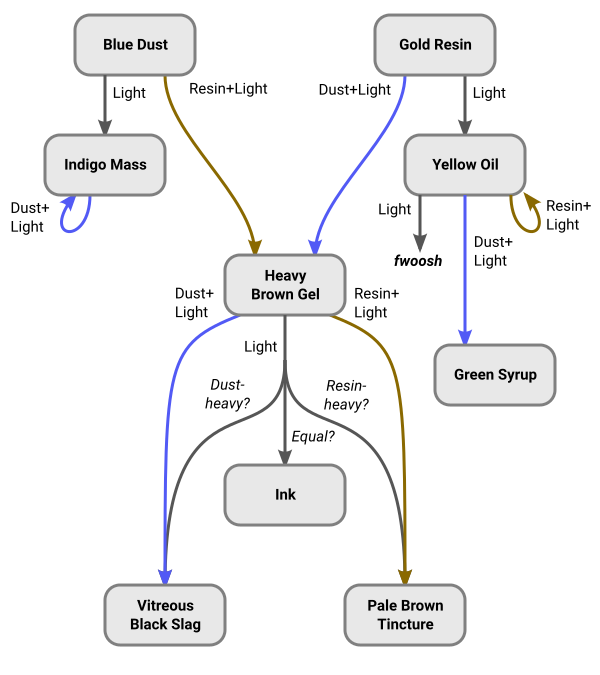 That's if you play in expert mode. In beginner mode, the "equal by mass" requirement is dropped, so the triple arrow is simplified -- gel always turns to ink.

Either way, it's a pretty simple puzzle. It's just meant to carry one scene of a large game. But it turned out to be a lot of fun to play with.
In fact, I wound up adding two more optional reactions for the sheer joy of it. You can throw a fire berry or an ice berry into the flask, which lets you create a few more substances. So that's two more diagrams like this one. They weren't a huge expansion -- just messing around, after all, not connected to any puzzle. But some.
What worked about this scene? I'd say it was the experimentation. The diagram is pretty dense. You've only got two ingredients, after all. Whatever you've got in the flask, you can try adding dust or resin (or nothing) and seeing what the light does. Something will probably happen!
(You're going to ask what happens if you zap a mixture of dust and resin and a third substance. Answer: the light reacts with the resin and the third substance, leaving the dust for next time! Cheesy, I know. But the puzzle has already mooted the idea that two zaps in a row have distinct effects.)
This lab scene was the seed of Hadean Lands (2014). I wanted to capture the joy of messing around with reactions, and then expand it into a full-sized game. (And take full advantage of an auto-goal system -- but that's a different post.)
HL's alchemy chart is much much larger than the one in Dreamhold. Here's the first recipe you find:

"FOR THE CLEANSING OF BRASS TARNISH: Prepare an atmosphere of fiery principles. Place a brass token within the bound, and seal it. Speak a word of essential nature, so that the properties of brass may be evoked. Compound the atmosphere with a resinous note. Then intone the Lesser Phlogistical Saturation to complete the token's investment. Place token directly on tarnished item."

And here's that bit of the alchemical system: 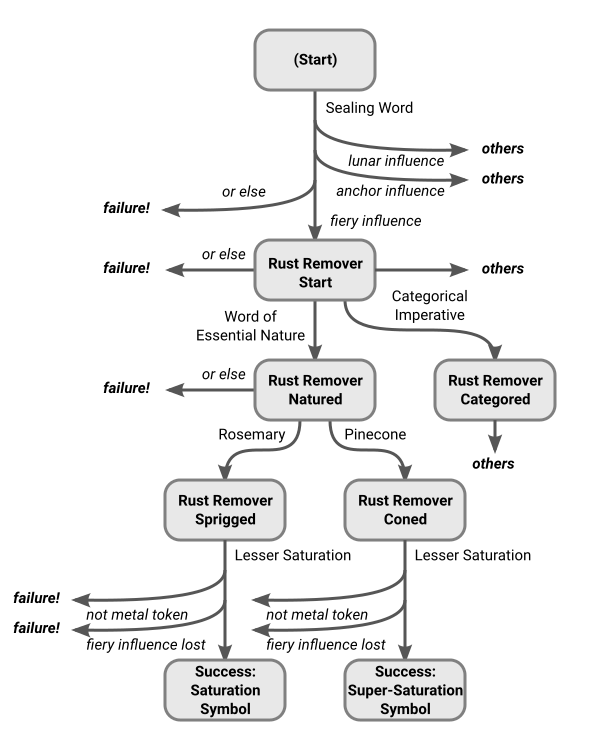 This diagram has quite a different shape. Each ritual is a chain of steps; you have to get each step right. This spell has one possible substitution -- figuring that out is an early puzzle. But other than that, if you make a mistake, you've entered a "junk" state and there's no way back.

The game's narration supports this model:

The game hints that that last command was a mistake. It also hints that you should add a second item to the bound, but in fact that's a mistake too. No binding ritual starts this way. You need a different recipe for that.
HL's alchemy, complex as it is, doesn't really capture Dreamhold's sense of joyful experimentation. It's a sparse web of narrow paths. In a few key moments, you must make an intuitive leap outside the box. But the bulk of the spellcasting is following recipes.
To be clear, I think HL is a fun game! The fun consists of:
The casting of the spells is atmospheric, I hope. But it's not the core experience of the game.
In the years since, I've compared these games in my head. They're at opposite ends of a scale: prescriptive to exploratory. Right?
Or maybe they're both missing something. Have you ever made caramel sauce? You heat sugar syrup until it's turning brown, you know, almost burning, not quite, that first little wisp of smoke, and then you dump in the cream and stir like a monkey. Then simmer some more until it's the right thickness.
Yes, there are recipes with candy thermometers. But that's what they're approximating. It's imprecise! It's all squinting at the color and jockeying the burner and waiting just long enough, but not too long. Cooking by feel.
(The cliche says that cooking is by feel but baking is precise. This is nonsense. Precise measurement is how you learn the feel when you start baking. And, I admit, it's how you get repeatability. I enjoy nonrepeatable baked goods, but that's just me.)
So this is what I tried to pull into the Mutuai Minor lab.

This room is set up with rows of workbenches and Bunsen burners. A rack of fountain pens sits on a stand up front. You also see a small architectural model in an alcove, with a neatly printed note tacked by it. The exit is up the stairs.
Your burner is off. You could turn it to low heat or high heat.
Your flask is empty.
You could add solvent, powder, or sap.

The note lays out the goal, an unsubtle riff on the Dreamhold lab:

"The workstations are stocked with pure solvent, powdered galla leaf (yellow), and renadi sap (green). Should be enough to get you started on a variety of inks. Try heating the powder slowly in solvent, for a start." 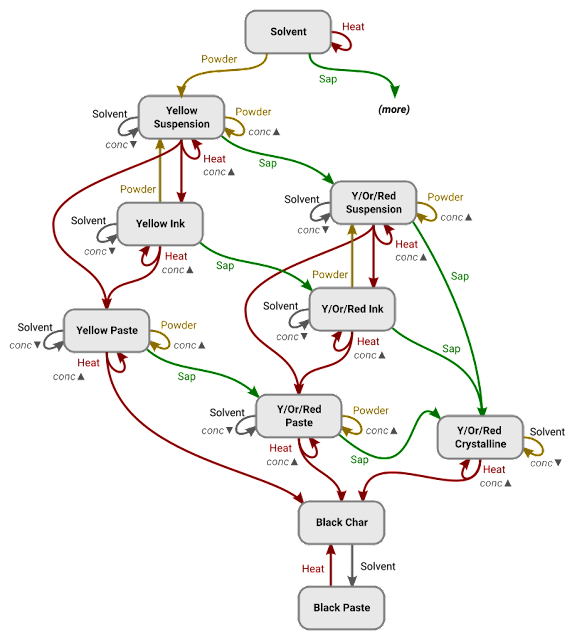 This has yet a different shape from the earlier diagrams. Why?

The result is lots of looping and branching arrows. Reactions may fail, succeed, or not succeed yet. And the difference between success and failure may be hidden! For example, you can set the burner to high, low, or off; but the temperature lags a few seconds behind that. You have to estimate that in your head. Or again: heat causes the mixture to reduce. You can see some changes, but some stages of concentration are unmarked.
I've tried to build in some familiar kitchen intuition. All reactions go faster at high temperature. But a hot liquid solution doesn't get hotter -- it simmers. If you let it boil dry, then the temperature will shoot up; soon the flask glows red. (Do not try this with real kitchenware.)
Furthermore, the temperature lag gives you a few seconds of carry-over cooking after the heat is off. So you might need to turn the heat off before the mixture looks done. (If this sounds unnecessarily fussy, read Alton Brown on scrambled eggs.)
What if you don't trust your sense of timing? Same answer as cooking with a cranky stove burner: jockey the heat on and off to get slow reduction. Dilute with driblets of solvent if you think your mix is too close to burning.
I've left many of the variations for players to discover. But my aim is to get people swapping this sort of "by feel" recipe. "Put in two drops of sap, then turn it to high for just a second while you throw in the powder. Then kill the heat and add more solvent while it cools to prevent curdling."
(The system is entirely deterministic, by the way. Nothing is random, aside from slight timer wobbles caused by net delays.)
If you're not familiar with Seltani, the easiest way to visit Mutuai Minor is to log into the site as a guest. Then visit this link. Hit "Enter the Cavern", select "Mutuai Minor -- Gallery Atrium" in the right column, and then hit "Touch the page" at the bottom.
Have I exhausted this theme? Don't be silly.
The Mutuai ink lab relies too much on guesswork. If I were redoing it, I'd put in a lot more subtle changes of color, texture, and smell. I think the hidden variables are important, but they should be hidden in a mass of sensory detail; the learning process should be all about figuring out which changes are important. Would that be "camouflaged variables" rather than "hidden variables"?
Mind you, I'm not saying that every game needs to feature arcane caramel sauce. The original Dreamhold lab was entirely satisfactory for what it needed to be. Plenty of games out there use deterministic, one-step-at-a-time crafting recipes. It depends on the rest of the game's mechanics! Very often, the gameplay revolves around finding rare ingredients. In that case, you want the recipes to be deterministic and foolproof. Do you want to see your hard-won vial of gorgon-venom ruined because you let the potion cook a few seconds too long? Of course not.
(It's not a coincidence that Dreamhold and Mutuai feature unlimited supplies of reagents, and HL lets you easily retry rituals from the start. I hate when gameplay is constrained by the fear of running out of stuff.)
The cooking metaphor might also be limiting. It's great for a three-ingredient mise en place, but would it support a larger game? You might want to explore more metaphysical or thematic recipes. Imagine rituals in which ingredients respond thematically to additions of Fate or Soul or Revenge, rather than "like a stove burner". (Jeff Howard has been simmering a project along these lines for years.)
Of course there are aspects of cooking we haven't even touched on. What about a game where you have to refine a recipe? Find cheaper substitutes without losing effectiveness. Make the recipe more reliable and easier to scale up. Teach it to people -- it's not a recipe unless it's reproducible! Maybe this is too fussy for a game. But then you might say that about the caramel.
I'll stop here. Feel free to grab the saucepan and run with it.
on September 19, 2021