Last month I alluded to design problems with duplicated objects in the game. (That is, what happens if you try to create two doses of some compound, when the game is only set up for one.) Conclusion: I punt on this. The game will flat-out refuse to let you do it. If you try, it mysteriously fails.

You might think this is the cheap way out -- but it will work, and I can fit it into the overall mystery of the game. Trust me, every game design involves taking the cheap way out of some problems. You pick your battles, and this one is not mine.

(My motto at this point is: "This game already had enough scope creep in 2011, never mind 2012. The screws are officially on.")

Yes, there was a spot where the plot required two doses of a particular compound. Not any more. Now there's compound X and compound X-prime, with different names, and you can substitute one for the other. Implemented, ritual variation tested, problem solved.

Otherwise, I have slowly been stitching the map together. It now has many doors, and some of them are locked (or otherwise impassable). Some of these doors have keys (or other door-passing items). The puzzle-blockage pattern is no by means complete, but it's filling in.

As it happens, I didn't spend today on doors; I spent it on little bits of paper. I already had a mechanism for learning rituals, and recalling what you've learned, but it wasn't hooked into actual game objects -- the pieces of paper which you pick up and read. (You may recall one such from the teaser.) Now that's all put together.

(Except for the part where you get vindictive and set the paper on fire. You never need to do this, but hey, I'm not going to stop you... Should just be a few minutes of work.)

(In fact... there. I just did it. Behold the power of this fully operational environmental rulebook system.)

Okay, enough showing off. Plans for February: continue stringing together doors, door-goals, and paths through the goal-planning system.

I will also do another iOS release of one of my old games. Where Dreamhold had a dynamic map, and Shade had a rendering of the game's "to do" list, Heliopause will have a nifty display of your starship and its magnetic sails. Here, have a parting screenshot: 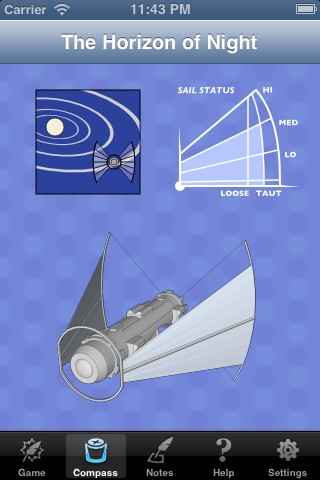