Today we are announcing the Interactive Fiction Technology Foundation (IFTF), a new 501(c)(3) nonprofit organization dedicated to supporting the software and services that underlie modern IF.

The web site (iftechfoundation.org) has all the information. But the quick overview goes like this:

For the past 25-ish years, IF has been primarily a free hobby supported by free-time volunteers. This is great; it's organized around a community (or communities) rather than being pinned to one company's fate. But it's also a weakness. People's free time varies. Services and tools go unmaintained.

The goal of IFTF is to support these efforts; to provide an umbrella organization that can manage projects when the original creator doesn't want to; and to be a visible donation point for benefactors who want to support IF.

(To be clear, IFTF does not plan to directly support creators or become a paying market for IF. The "technology" in the title means tools, services, and web sites.)

Our first project involves assuming stewardship of IFComp, lending the event (and its website) the legal and financial backing of a formal organization. Jmac will still be in charge of IFComp, but he will now do it wearing an IFTF hat. And IFComp will now (through the parent organization) own its own web-site code and copyrights and so on.

Our plans for the near future include support for Twine and doing a study on accessibility of existing IF tools. Beyond that, well, we'll have to see how much money comes in.

Who are we? A bunch of IF fans, authors, and people generally known in the community:

We also have a large advisory committee drawn from across the various IF worlds.

I could burble on about this project, because we've been swinging at it for several months and the ideas are flowing rapidly. But today's the day we announce it, so I'll stand back and let the news percolate.

So I bought a Steam Machine. How did that go?


A year ago I wrote this post I am a person who will buy a Steam Machine, then Followup on Steam Machines, and I felt all clever. To reiterate the basic argument:

I've been getting along all-Mac for a long time. But, well, The Witness. And other cool-sounding indie titles. And then there's Obduction, which will be available for Mac, but... the recommended graphics hardware just isn't cheap on the Mac side of the universe.

SteamOS looked like a tolerable compromise. It's not Windows. (I know how to maintain Linux.) But it's as cheap as Windows. There are too many models, but if I pick one brand it's only about four models and I don't have to read about graphics cards until my eyes bleed. I figured Valve was a big enough gorilla to corral the game studios into Linux/SteamOS support. Maybe not top priority, but some support.

So, last winter I bought a Steam Machine. Alienware, one of the middle models, I don't remember the letters and numbers. It arrived in December.

Hadean Lands is now up on Steam


You can buy HL on Steam. That is the whole blog post. 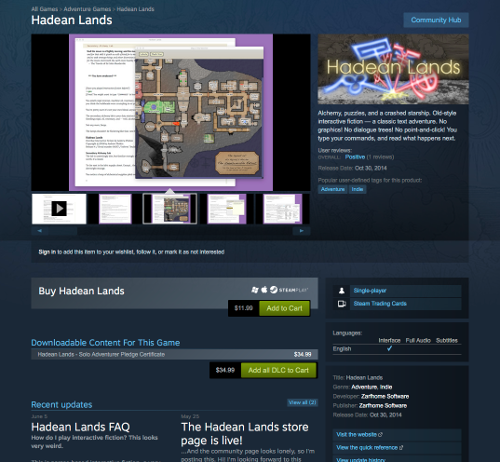 Bring Out Your Dead: Flashpaper


A few weeks ago Emily Short declared the Bring Out Your Dead game jam, an event dedicated to sharing our abandoned projects and failed experiments.

I posted... the first prototype of The Flashpaper War! And the second prototype too. (Playable on web pages. I've also done iPad prototypes of the game, but posting those isn't really possible. You're missing some cute animations, is all.)

I said a year ago that Flashpaper would be my next IF project. And I still intend that to be true! I built these prototypes last year and demoed them in private; I showed a version at Boston FIG as well. But they just didn't work out, so I scrapped them and started from scratch.

(And then I had to spend some time on paying work, and some more time working on the Steam release of Hadean Lands... which is this Monday, by the way. Just thought I'd say.)

The start-from-scratch plan is still marinating. I have plans. They may even see daylight this year... but for the moment, enjoy these Flashpaper prototypes.


Hey! I am back from Balticon, and so it's time for the HL release train to rumble into motion. Here's the first stage:

I have posted a new release of Hadean Lands to my Humble Store and Itch.IO pages. This is the new Lectrote-based app, for MacOS, Windows, and Linux, with autosave and integrated map and journal windows.

Bug reports are very welcome. Any bug I fix before the Steam launch is a win.

This release includes both a native app and the bare HadeanLands.gblorb game file, so you can play HL on any Glulx interpreter. (But you don't get the dynamic map and journal if you play that way.)

If you have saved games from the original (2014) release of HL, they are not compatible with this release. Sorry! I've stuck the original HadeanLands-2014.gblorb in the package too, so if you really want to go back to your old save files, it's possible.

(The differences between the current 2016 release and the old 2014 release are small. A few typos, a couple of fixes for obscure ritual corner cases, some improvements to parser disambiguation.)

Here's the important announcement: On June 20th, the price is going up! When HL launches on Steam -- that's June 20th -- it will launch at a price of $12 US. On that day, I am raising the price on the Humble and Itch stores to match. (The iOS version will remain at $5.)

This means that you have three weeks to buy the new version of the game at the old price. Think of it as a secret preparing-for-Steam sale.

Obviously, it's not a secret secret that the game is still available for $5. This is the Internet and you're reading it. But it's a fine line between "I underpriced HL when I originally released it" and "you're jacking up the price on us, you jerk." I don't want to get into that argument on the Steam store page for HL. My position there is "This is a $12 game." Keep it simple, keep it focussed on the Steam launch.

Okay, what else is going on...

If you've looked over the Steam store page you've probably noticed the DLC! Yes, Hadean Lands will have DLC, and no -- I'll spill the joke right away -- it's not extended game content. It's the Hadean Lands Solo Adventurer Pledge Certificate. That is, you can pay extra money for a certificate that you sign promising not to look at hints. Purely optional, I assure you.

The certificate will only be available through Steam. I've put up a detailed explanation on the DLC page. So far, comments are running 100% for "clever idea"... okay, that's 100% of one comment. Still, a positive response. Might even make me some extra money.