I don't remember when I released this disk image. Somewhere in the 1982-1985 range, certainly. The mazes were designed earlier, on paper. I got the notion to implement them in interactive form. Then, no doubt, I dumped them on some modem pirate site in exchange for download credits. What can I say about these things? They exist in the series of "Praser mazes", a label which I've used for puzzle and maze concepts since way back. Praser Maze #1 is justifiably lost, as are many of the later entries, but Praser 5 (word puzzle, reimplemented for Z-machine) and Praser 12 (non-interactive hunt-style puzzle) are on my web site.

The term "Praser" comes from a dream I had when I was a kid. The dream Praser-maze was my archetypical ideal of maze-puzzles: an inhabitable world of hidden doors, garden paths, elevators, subways, and so on. Really, there's a reason that Riven became my favorite adventure game when it appeared years later.

(I don't remember why I used "Penqueriel" in these programs instead of "Praser". Sounded better, I guess. Later, I named my TinyMUD home base the Penqueriel.)

Select "keyboard" mode in each game. Movement is with the IJKM keys. Nobody told me that WASD is easier on the fingers.

Both mazes are hard, but solvable with a lot of experimentation. Thirty years ago, I had the solutions memorized. Today, I haven't re-solved them.

As you can see, my teenage sense of puzzle-design was on the bastardly side. Maze #2 is unfair by any reasonable standard; it's a maze with invisible teleporters, and the only approach is to map it. Maze #3 is more interesting. You can carry up to two colored keys and store a third in the storage box. There are colored gates and one-way gates (and elevators, boat-docks, bridges, etc). Since Apple hi-res graphics offered only six colors, I had to resort to stripes for the seventh key type! 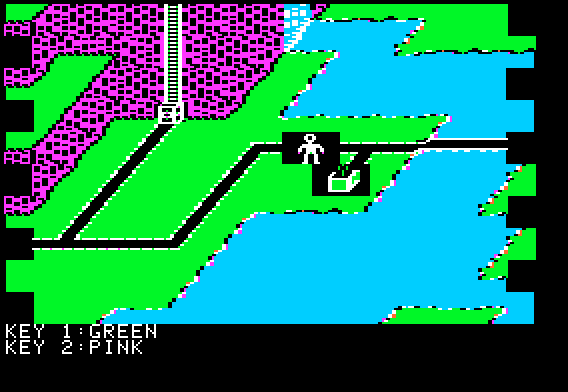 I was clearly fascinated with pushing the form as far as it could go. I was aware of the limited viewport -- I put amusing scenery within viewing range and hid important color-sources outside of it. I was careful to construct consistent scenery (in the apparently-isometric, actually-2D map). I built a scenic overlook, a bridge mini-maze, and some waterfalls. At one point you get a glimpse of the Promised Island where every key-color lives, but you can't get there.

(It's not actually isometric projection, right? What do you call that -- "cabinet projection"?)

I implemented these games in 6502 assembly, although the title screen is BASIC. (Someone came along later and added a pre-title "crack" screen, because somebody always does that. Of course I released the games without any kind of copy-protection. You can hit ctrl-C at the title screen and mess around however you want.) (You might have to blindly type TEXT after interrupting the HELLO program.)

I was proud of many of the tricks I came up with. Look at the way I correctly handle being over-or-under a bridge in Maze #3. (There's no visual distinction, but you can only leave on the same path that you entered on.) But the big trick, clearly, was faking an alpha-blend by flickering between two images. That's how the title menu places an impossible seven lines of text below the graphics. (Apple hardware only supports four lines of text there!) (Bitmap fonts were way beyond my capabilities.) Similarly, the "fade-in" of graphics elements when the title screen appears.

I used the same trick to "composite" the stick-figure protagonist with the background in Maze #3. (I could have made the screenshot above an animated GIF to depict this, but I didn't. You're welcome.)

I have not yet located a copy of Maze #4, which was much prettier. (I think I used double hi-res graphics, and designed some garden sculpture.)

And now, on an entirely unrelated topic: I'm having a bit of trouble figuring out what's going on in the screenshots, but it looks like it might be an orthographic projection.

I just tried the key maze in Virtual II. I stopped after I trapped myself for the first time. Fantastic graphics! I mean you were aged 8-11ish? I think we're about the same vintage.

I forget when I started to see isometricky looking stuff coming in on the C64, but it was certainly the mid 80s. Realm(s?) of Impossibility was maybe the first time I remember seeing something like this on the Apple II, excluding less adventurey presentations like Zaxxon.

I didn't learn any assembly 'til I was 20 or 21ish, by which time the Apple II's day had passed.

Have you thought about writing up your old games? IE An entry like this for each one. I don't blame you if you have but set the idea aside for time reasons. I've been doing this for my old games, but to do each one takes an age, so it's more a long term downtime project for me. You can click my link to go to my documenting site.
Andrew Plotkin (Mar 5, 2015 at 3:42 PM):

I write them up as and when they show up in some noteworthy format. (I don't particularly plan to go on an extended fishing expedition into my own past. :)
namekuseijin (Mar 5, 2015 at 9:09 PM):

Clever coding by a brilliant kid. Still, gotta say you're a much better game designer now, and thankfully without aging graphics to boot. Can't really stand those early graphics, unless they don't get in the way, like in early arcades.

Praser 5 is suprisingly good, though. At least the port to zcode, reminds me a bit of dual-transform. Was it a text-adventure then or the same isometric maze crawler?

so that's the origin of zarf... an obscure short scifi from the golden age. I thought it had to do with a lamp...