We learn today that the casual-MMO Legends of Zork is shutting down, two years after launch:

It is with a heavy heart we announce that Legends of Zork will be closing its doors to adventurers from noon BST (GMT +1) Tuesday 31st May 2011.

We all know that development work has been scarce of late: We have tried to find leeway within a work intensive schedule to devote some time to fixing the issues in the game; We have tried to find time to create new content for the community; But on the whole we have been unable to undertake any major work on the game.


And now, the part where I review DASH and BAPHL (spring 2011 editions). Okay, not really review. The part where I call out some interesting aspects of each, and compare them. Because I like it when game design improves over time. 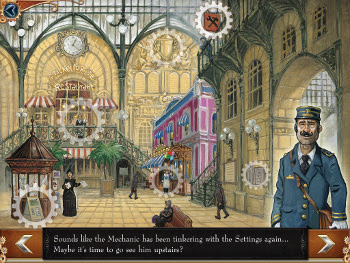 ...I want to know who came up with this flaming disaster of a main menu. Confess. Right here. I'm talking to you. I want you to comment on this blog post and say "That was my idea."

This is the main menu from Days of Wonder's new Ticket to Ride iPad release. You can actually see the design bleeding to death in front of you. You start with some nice artwork. But you don't want to clutter it up with labels or buttons. Result: impossible to decide where to tap! Wound one.

So you had to add some "gear" icons (which aren't quite contrasty enough, but then if they were contrasty enough they'd detract from the artwork, right?) Now at least the player knows where the buttons are.

But she still doesn't know what any of the buttons do, so you had to add a voiceover to explain them. Wound two. The player has to sit through the entire list to learn the menu, and then probably has to sit through the list again every time she wants to use the menu in the future, because how are you going to remember all that? Oh, and the explanations can't be clear -- they have to be cutesey in-character clues.

But the UI still doesn't work, because the player might be hearing-impaired (or just have the sound switched off). So you had to add subtitles too. Wound three: bleed out. In order to avoid putting words on your menu, you've put entire sentences on your menu! But sentences that appear one at a time! It's perfect! And I'll have to listen to those stupid voiceovers forever.

Jesus Headpounding Migraine in a weasel-bucket. You've taken the worst idea of late-90s UI design -- the mystery-meat menu with cursor hover labels -- and port it to a platform that doesn't have cursor hovering, and you managed to make it worse. Kill me now.

(Ticket To Ride is fine once you get a game going. Nice solid implementation. I'd like a face-to-face play mode, even if it has to run with open hands. But it's worth buying as-is. Except the menu KILL ME NOW.)

(Some people would ask "More than usual?")

A short late May update


I let this update slip late, because I hoped I would have a Secret Project to announce. But legal paperwork takes however long some other lawyers think it will take, and so it is still Secret. Sorry! Hopefully soon.

What can I report? Well, I have made substantial progress on the iPhone interpreter. It is now capable of playing a Glulx game. It's not pretty or polished, but it runs. I've also started adapting a Z-code virtual machine to the same interface, so that I can release my old games (and the Hadean Lands teaser!) with the same iOS packaging. (To be technical, I'm working on a Glk interface port of the Fizmo interpreter. Did you want me to be technical? No? Well, there you are.)

Now, this interpreter work isn't ground-breaking. In fact iPhone Frotz can do all this already. But this will be my code base for future improvements, so it's important to have it all down solid. Which it isn't yet, mind you. Solid. Yet.

Speaking of running games, I released a game last week! A very small game: The Matter of the Monster. It's not classic IF. It's a sort of choose-your-own-adventure experiment; I used the Undum Javascript toolkit. I tweaked it a bit, though. Try the game -- it'll take you about ten minutes -- and you'll see what I mean.

(Thanks to Jacq's Indigo New Language Challenge for spurring me into this.)

Finally, I'll remind you that I'll be at Balticon in two weeks. (That's in Baltimore, May 27-30.) I'll be on a couple of IF panels and talks... sometime that weekend. They don't seem to have a schedule up yet. Stay tuned, as they say, space fans.