Since the dawn of Ravenhearst, the hidden-object genre has been with us. A screen full of junk, and a list of named items to pick out... Was it Ravenhearst, actually? The web is telling me that I should be blaming Mystery Case Files: Huntsville in 2005. That's still pretty recent, mind you.

2005 was also the year Myst 5 appeared, to not very widespread interest. Now, hidden object games didn't exactly displace the graphical adventure game. Those had been receding into their niche for years already. The Mystery Case Files were aimed at the newly-buzzlabelled casual-gaming market, meaning people who hadn't spent their teen years sweating over maps and joysticks. But the two genres have commonalities. Detailed environmental visuals led to a degree of convergent evolution: hidden-object games developed narratives, characters, dialogue -- even physical, mechanical, and symbolic puzzles. Sliding blocks and jumping pegs made their occasional appearance.

But the hidden object world stayed casual -- meaning aimed at a broad market; meaning easy. Picking a microscope or watermelon out of the onscreen welter might be time-consuming, but it didn't require puzzle-thinking per se. Hints were freely available to point out that last annoying dog collar. And when adventure-style or logical puzzles turned up, they stayed at the shallow end of the brain pool.

I don't mean to say I despise these games. Occasionally, when I want to kill an evening or two, I'll put down a few dollars and find me some objects. Recently, I've been trawling Apple's App Store -- because really, if you're going to spend an evening tapping on objects on a screen, the iPad is just the thing for it.

So I found myself looking at Mike Wilks's The Ultimate Alphabet, saying "Well of course." (App Store link.) 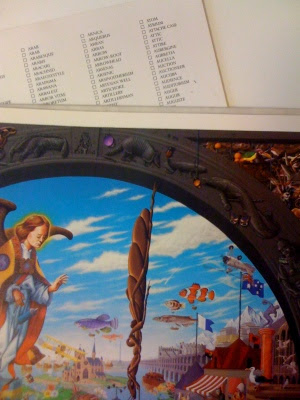 You may not remember The Ultimate Alphabet. It appeared in 1986, a book and a challenge -- not a riddle-book of Masquerade's ilk, but a straight-up scavenger hunt. Name all 7777 objects in the twenty-six absurdly detailed paintings. To make it easy, they were divided up by letter.

There was a way to check your score, if you were mad enough. The book (in some editions) came with a workbook, containing a checklist. Fill it out and send it in for a prize! But no guessing; the checklist contained some 4000 red herrings, and if you marked objects not visible in any painting, that's points off your score.

I tackled this for about half an hour, back in high school, and then realized that no human being could possibly finish the thing. I added it to my collection of Awesome Books; I forgot about it. Until it turned up on my iPad, as I said "Well of course" over and over. Followed by "Hmm."

In Ravenhearst et al, you have a list of perhaps a dozen phrases, and a screen full of images. You stare at the screen until you see somethat that matches your list. You click. The computer tingles in ecstasy. The setup is ripe for "click wildly" abuse, so the games usually limit your tap rate, but fundamentally it is click-and-win.

Call Ultimate Alphabet an unidentified-object game. The objects aren't hidden; their identities are hidden. You double-tap on an object, and the game asks you what it is. No points until you've typed the correct word... starting with the correct letter.

You might think this is easy. You might have forgotten that there are many hundred words per page, and several may apply to any given depiction. Double-tap the large feline on the "C" page, and type CAT. Fine, says the game, now give me seven more words. As it happens, it's a CHEETAH, which is both a CREATURE and a CARNIVORE, and it's got a COLLAR and CHAIN, which means it's a CAPTIVE... one more? Why, cheetahs have tails, which means it's a CAUDATE.

Yes, seriously. No, I didn't figure CAUDATE out from scratch. For each word, the game tells you the number of letters, and offers a cryptic-style (British crossword) clue. If those stump you, you can ask for an additional hint, which gives you a straight (non-cryptic) definition. Beg once more and the game gives you all the letters, scrambled. If you get those in the wrong order, the game will add jigsaw-style coloring to the letters, at which point you have no more excuses; match them up with the background.

I bulled my way through the "A" page this way -- using as many hints as I needed. (362 "A" words.) Then I noticed that the game tracks your hint usage. If you solve a word using only the depiction and the cryptic, it's a gold coin. If you ask for the simple definition, silver; if you need the letters, copper.

That got me to apply some discipline, and I worked through "C", "D", and "B" using as few hints as possible. (Yes, I did them out of order. I haven't finished "B" yet.)

And that brings me to my point, which is that this is one tough hidden-object game. Or hidden-name, or whatever. If you've been avoiding the genre because you think it's for wimps -- well, mostly you're right, but pick up The Ultimate Alphabet. It will not let you off lightly.

Allow me to recount. Of the 547 "B" words, I got through perhaps 200 just by looking at the pictures and the cryptics. Then I buckled down (ho ho) to full-bore solving mode. Anagram server in one window, for the trickier cryptics; Wikipedia in the other. Wikipedia rules. There are sixteen "B" fish in this picture, plus about fifteen flags of "B" countries, twenty-odd "B" birds, and a dozen "B" butterflies. Without reference materials, you're sunk.

That gets me through maybe another hundred words. Then I pull out the heavy artillery: the workbook that came with my original edition of the book. It lists all the words! Plus 300 red herrings in the "B" chapter. But correlating that word list with cryptics, the pictures, and the Internet... I'm up to 375 words solved so far, no hints. I'd like to get well past 400 before I start begging for help.

(The cryptic clues aren't great cryptics. To be fair, they were ordered in bulk. Credit to Philip Marlow and Brian Dungate for turning out so many. But they rely on a lot of weird acronyms and letter dropping. For example, CAUDATE is "Tailed posh accountant returning with partner" -- the wordplay is "U+CA backwards plus DATE". I don't even know why "U" is "posh"; maybe it's a British thing.)

(The flip side of that is, you always have the picture and you know the first letter, which makes many of the cryptics easier. It balances out overall.)

Oh, yes, fair warning: the art is from 1986. Some of those flags are for countries that no longer exist. Adds to the fun, right? Contrariwise, the cryptic clues are current.

The game interface has many clever things and some stupid things. I could get into them but let's not. The art is lovely, and takes wonderfully to the zoom-in interface. (I can see more detail than I could in the printed edition, so that lays that ebook canard to rest.)

Yes, you need an iPad; the developer site refers to testing an iPhone edition but I don't see it yet. Yes, you have to pay incrementally; the first four letters are a $7 package. (But the game offers a one-hour free demo -- glad that sales model has finally penetrated the App Store.) They promise the other 24 letters are on their way.

I realize that many of you devoted Gameshelfers are not in the market for this game. Either you don't get cryptics, or you aren't into puzzle-hunting, or (quite likely) you don't have an iPad. But this is a rare fusion -- a "casual" game for grown-up puzzle fiends, based on artwork that's really unequalled in the puzzle-gaming world.

Thanks. I had no idea.

Can anyone tell me where I can get a copy of the work book for the Ultimate Alphabet book (which I do think is absolutely wonderful)!!!?
Andrew Plotkin (Nov 9, 2011 at 11:30 AM):

I bought my copy new, so I can't help. You'll have to haunt abebooks.com, Amazon's used-books list, Ebay, and so on.