It's been a crazy couple of weeks in IF, and we're expecting several more months of crazy on the horizon. 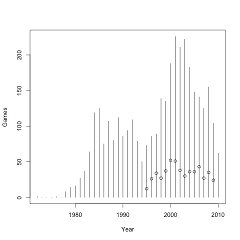 The overall shape is clear; you can see the early years, the mid-80s boom. The tail-off of the commercial companies crosses the rise of the early-90s amateur and shareware community. And then, the modern IF boom of 2000, when the IFComp was really taking off.

You could read the past several years as a discouraging slump. I demur. We discussed this a little on IFMud, and noted some probable causes. Some sources of very small, lightweight IF games -- SpeedIF, ADRIFT mini-games -- have become less popular. More full-length games are appearing. And, we think, IF is spreading into many corners of the online world -- it's no longer concentrated in two newsgroups and an FTP site. So not all new games are appearing on IFDB.

However, these are off-the-cuff guesses. I can't back them up with data. Interested in doing some more IFDB research? Game size, platform, category, new authors vs established names... lots of room for study.

Hi! Thanks for mentioning my little project! How'd you find it? It's still very much in it's infancy, so please, let us know any ideas you have for it, and if those ideas come in the form of patches to the C or Perl code at http://github.com/theorbtwo/glknew, even better. Don't forget to save early and often. Please, any ideas at all. Really. Let me know what you think.
Andrew Plotkin (Jul 29, 2010 at 3:46 PM):

Someone linked to it on the intfiction.org forum: http://www.intfiction.org/forum/viewtopic.php?f=38&t=1248 . I don't know where he found it.

It would be nice to support a "type any URL here to play the game" feature, which Parchment has. Of course that depends on the server's ability to keep up.

It would be possible to use my GlkOte library as a front-end for this (the javascript library that handles the display layer). This might make a tidier interface; I've got the inline command input working. On the other hand, you support images and I don't (yet). Up to you. Feel free to plunder my code for implementation ideas if you want.
matt w (Jul 31, 2010 at 8:28 PM):

Another point about the graph is that the TWIFComp entries aren't (aren't all?) indexed. That's around 50 or 60 more very short lightweight games, which pushes the total way up.
Jason McIntosh (Aug 1, 2010 at 1:11 PM):

Huh, interesting that none of the TWIFComp entries seem to be in the IFDB. (At least, Aaron Reed's winning entry ">" isn't, so I assume no others are either.)

I wouldn't want to put all or even most of them in there, but you could argue for the inclusion of the winners.The contest itself was notable, even if the entries themselves are iffy.
Andrew Plotkin (Aug 1, 2010 at 5:22 PM):

Sure, the TWIFComp entries should be in there. There is no notability criterion -- or if there is, "a game was released in a widely-discussed competition" beats it.

It makes this sort of graph less meaningful, but that means you need better graphs (showing game file size, for example).