For the past few years, Mateusz Skutnik has been publishing a series of mini-graphical adventures (in Flash) called "Submachine". (JayIsGames has a good list of links and reviews.) 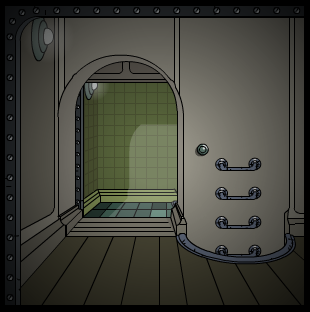 The games are spare on storyline, but each game has a little bit. Even if the pieces don't fit together tidily... yet. As you might expect, there's been lots of ongoing forum discussion about the series.

Now the author has put up a new Submachine site: Submachine Network Exploration Experience. This is explicitly not a game; it's a set of interlinked mini-worlds, slices of the other games. The only "puzzles" are exploring and discovering new coordinates to explore. (Earlier games introduced a coordinate-based teleporter system.) But -- this is the cool part -- each mini-world contains some printed notes: forum transcripts, giving different people's theories of what's going on and what various parts of the game mean.

This is a lovely way to include the player community in what is, mechanically, a series of solo adventures. It incorporates player contributions; it acknowledges that player response is part of the story, without throwing "canon" (whatever that means) out the window (whatever that means). The Exploration site is clearly expandable -- the creator can add new mini-worlds whenever he wants. Or add new transcript notes. It's not part of the series (there will be more Submachine games) but it's part of the world.

You know my kinks, Watson, so you know this immediately reminded me of Myst Online. Cyan's project was a hugely ambitious MMO, of course, whereas Submachine is one designer's tightly-scoped project. But with SNEE (do I call it "SNEE"?) Mateusz Skutnik is tackling the same issues: ongoing story and the fan community. And, I must admit, he's now a step farther than Cyan ever managed.

(I don't recommend you start with the SNEE site -- it won't mean much if you haven't played the earlier games. Start with Submachine 1: the basement. The whole series is accessible from the Submachine World web site.)

EDIT-ADD: You should immediately read author Sarah Monette's essay on worldbuilding with 10 gnomes, which is about Mateusz Skutnik's hidden-gnome games, their artwork, and how it embraces different facets of the industrial landscape of Elfland. I mean Poland.