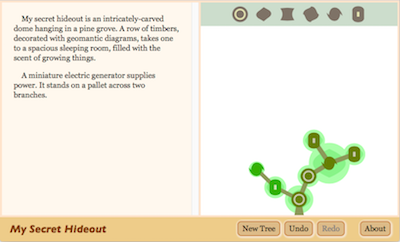 ...a wacky, creative thing set in a treehouse. It’s not like any app you’ve seen before. Buy it! Play around with it!

Which is to say, it was a procedural text generation experiment that I thought might sell a few copies. It did, in fact, sell a few copies. So I let it sit there on the App Store, generating its handful of dollars a month, and I went back to working on Hadean Lands and Meanwhile and all the other cool things I've done since 2011.

Then, last month, I got a notice from Apple that I really should update that app, please, or they'd yank it from the store. (Apple announced this policy last year.) This was not an illogical request: the last time I touched Hideout, it was to add support for iOS 5. The app never supported retina displays, much less the modern big-ass iPhones. It mostly still worked on current devices and the current iOS, but the layout had gotten screwy. The VoiceOver support was sort of broken. Also it had that "may slow down your device" warning, which I believe translates as "this is a 32-bit app, how Paleolithic, eww."

To be clear, I think that dropping apps from the App Store is a stupid policy. Apple's correct move would be to apply a "search death penalty", hiding obsolete apps from all browsing and keyword search. If someone still has the direct link and decides to buy the app for their ancient iPod, take their money! This is history! Preserve it, jerks.

But, to be equally clear, I could update My Secret Hideout for iOS 10. It's just not worth the time and effort, because the app makes no money. (I got a similar "please update" notice for my Heliopause app, and I jumped right on that, because it uses the same IF framework as Hadean Lands. Which makes a bit of money. All of my IF apps have now been buffed to a pleasingly modern shine.)

So is My Secret Hideout lost forever? No!

I decided that if I couldn't make money on it, I should make it free. But if I'm to make it free, I might as well make it free on a web page. That way, everybody can take a look, even those benighted souls without iPhones.

Thus: play My Secret Hideout on Itch.IO. If you like it, please consider the "donate" button.

On the up side, I was finally able to delete the Facebook account that supported the "Export your tree to Facebook" feature. Man, was that ever a waste of time.