Meanwhile: An Interactive Comic Book by Jason Shiga is now available for the 4th-gen Apple TV. 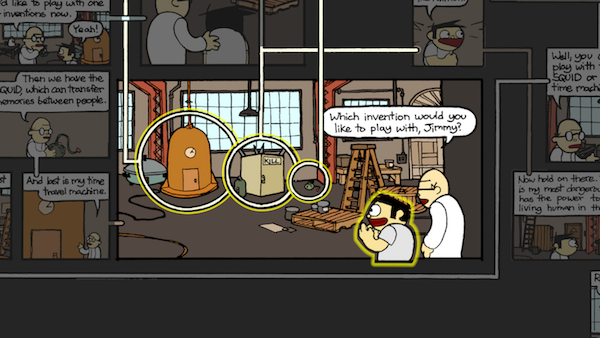 That's pretty much the whole announcement. You can buy it. If you've already bought the iOS version of Meanwhile, you can download it for Apple TV for free. (Go to the App Store app in the TV interface; select "Purchased"; scroll down and select "Not on this Apple TV".)

Oh, and the iOS version has been updated to fully support the iPad Pro. Somebody with an iPad Pro, try it and tell me how awesome it is.

MEANWHILE is not an ordinary comic. YOU make the choices that determine how the story unfolds. MEANWHILE splits off into thousands of different adventures. Most will end in DOOM and DISASTER. Only one path will lead you to happiness and success.

Lectrote now autosaves; Hadean Lands is that much closer to Steam


I've been steadily updating Lectrote, my new cross-platform(*) IF interpreter. In the past month it's gotten icons, a preferences dialog with font and color options, and -- most exciting from my point of view -- autosave. 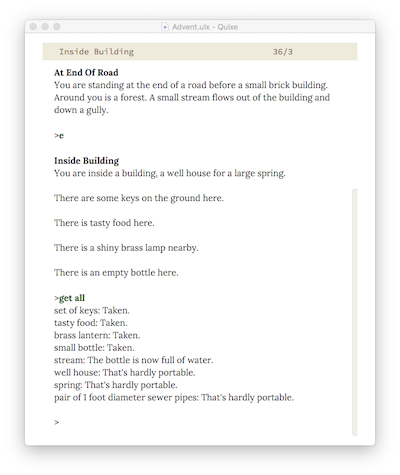 (* Cross-platform meaning that Lectrote runs on Mac, Windows, and Linux. The interpreter only runs Glulx games, not Z-machine or TADS or any other format.)

Autosave means that if you close the game window (or quit the interpreter) and then open it again, you will find your game where you left off. You don't have to use the SAVE or RESTORE commands unless you want to keep multiple save points.

As I wrote last month, autosave is a bit of a nuisance. I spent February getting it all polished up and tested. And then the tests revealed some obscure low-level bugs in the iOS implementation of autosave. Turns out my iOS Hadean Lands app was failing to store one VM table, and therefore running about 50% slower than it should have. Whoops. Good thing I wrote tests, right?

Lectrote on the desktop seems to be adequately speedy for most games, including Hadean Lands. So that's the last big technical barrier to creating a really nice HL app for Mac/Win/Linux...

I don't mean to imply that a Steam release is coming this week. It will still take some time to adapt Lectrote to a single-game interface. Naturally I will document this process! I want to make things as smooth as possible for any author who wants to release an Inform game as a Mac/Win/Linux app.

(The iOS process is, er, not very smooth. This is mostly because Apple's process for the iOS App Store is baroque, to say the least. I'm not planning to put HL in the MacOS App Store, so it should be simpler.)

I'll also see if I can include the extra dynamically-updating windows from the iOS version of HL: the clickable map and the alchemy index. In theory, these aren't too hard to set up -- I can copy the logic and contents right over from the iOS app. In practice, theory sits on the curb and laughs at you when you say things like that. So we'll see.

But the end is in sight. Give me another couple of months.

Once I have a working HL app, I will release it as an update for the existing Mac/Win/Linux versions of the game. If you have downloaded HL from the Humble Store or Itch.IO (either as a purchaser or a Kickstarter backer), you will be able to download the new app and try it out. If no horrible bugs turn up, I'll start preparing the Steam release.

The Space Under the Window on sub-Q


My experimental 1997 work of IF poetry, The Space Under the Window, has been reprinted by sub-Q Magazine.

(Yes, it's been available on my web site all along. But sub-Q is cool! Also they pay for reprinting short IF! I like that sort of thing. So go replay it there, if you haven't tried it in a decade or so.)

SUtW is an interesting side note of its era. 1997 was still solidly the era of "IF means puzzle-based parser games", although IFComp was rapidly loosening up the definitions. My idea wasn't exactly choice-based IF -- I was still committed to freely-typed input -- but I wanted to get away from standard verb-noun commands. And, of course, I wanted to try escaping the notion of puzzles.

I wound up with a sort of freely branching, non-goal-oriented narrative; what we might call a "time cave" today. I wasn't able to sustain much of it. But I liked what I got.

(I'd have a hard time telling you exactly how big the structure is! Some of the source code got eaten by a hard drive crash -- remember when MacOS didn't have memory protection? It wouldn't be hard to disassemble the Z-code and reconstruct the source, but I've never had the urge.)

Thanks to Tory for this opportunity, and also for pulling together the cover art. SUtW predates the era of IF cover art, so I didn't have any ready to go.