Designing alchemy in a puzzle game


A question about Hadean Lands from the tweet gallery: "Have you written anything about how you approached designing the alchemical system?"

Excellent question! The answer is "No, but I should, shouldn't I," yes okay. (Thanks @logodaedalus.)

My twitter-sized reply was "Sound cool while supporting the puzzles," but I can say more than that.

(Note: I will start this post by talking about HL in generalities. Later on I'll get into more spoilery detail about the game structure. It won't come down to specific puzzle solutions, but I'll put in a spoiler warning anyway.)

Why it takes longer than you think


In case you're wondering, nobody hassled me about how long the rewards took. Apparently you folks really were in it for the game -- or to support me, which is even nicer.

However, I bet there are people out there who are working on Kickstarters. And they should be warned: it always takes longer than you think. To substantiate this, here's a timeline of Hadean Lands work that came after the game shipped.

Note that I did lot of reward design in December, but didn't order the stuff until early January. That's because I knew I would be out of town for the last week of December. I didn't want expensive parcels arriving when I was gone.

I am a person who will buy a Steam Machine


Yesterday Valve lit up their Steam Machine store page, offering previews of the upcoming Steam-based gaming consoles. (All "available November 2015".) It's a somewhat preposterous range of hardware -- sub-$500 boxes up to $5000.

I am not and never have been a connoisseur of graphic-card model numbers. ("More digits is better, right?") Come November, I'm going to have to browse a lot of tech-rag web pages to figure out which way is up.

I did a little of that browsing today. Naturally it's all handwaving at this point, and this post will only throw more hands in the air. But here are the first two articles I found:

You can read the articles if you want, but the headlines sum it up. Either the Steam Machine is a rising force in the console market, or it's a laughable dead end. Journalism!

I can't speak to the market appeal of these things. But I was excited by the original Steam Machine announcement of 2013, and I still expect to buy one this fall. Why? Many factors converging.

The Adventure Gamers Store is open


The season of GDC-and-PAX is upon us, which means more gaming news than any one human can hope to digest. And yet, I will burden you with a couple more snippets.

The AdventureGamers.com site, which has been reviewing adventures in various forms since 1998, has opened a web storefront specifically for adventure games. Hadean Lands is in the launch lineup, as are several other indie highlights: Dominique Pamplemousse, Lumino City, stacks of Wadjet Eye and Daedalic titles, etc.

(AdventureGamers.com gave Hadean Lands a super-nice review back when I launched.)

Note the Adventure Gamers Store currently only offers Windows versions of these games. (They say they hope to add Mac/Linux in the future.) Also, everything is currently priced in Euros. (You can buy from the US or anywhere else, don't worry.) I've set the HL price at €4.39, which makes it a fractionally better deal than the $4.99 price I've got everywhere else. Snap it up before the winds of currency conversion shift!

And in other news about places that sell HL...

The Itch.IO site has just announced that they will start taking a share of game revenues. (For most of their history they have been a completely free service.) This change will happen on March 23rd.

Unlike most platforms, they are going to let the game author decide what cut Itch takes of their games. They suggest 10%, but the author can move that slider anywhere between 0% (author keeps all the loot) up to 100% (donating all revenue to support Itch).

This is a sweet idea, and very much in the spirit of the Itch service. I am happy to support it by offering them the same 30% taken by Apple, Steam, and (for that matter) the Adventure Game Store. You can buy HL via Itch here. 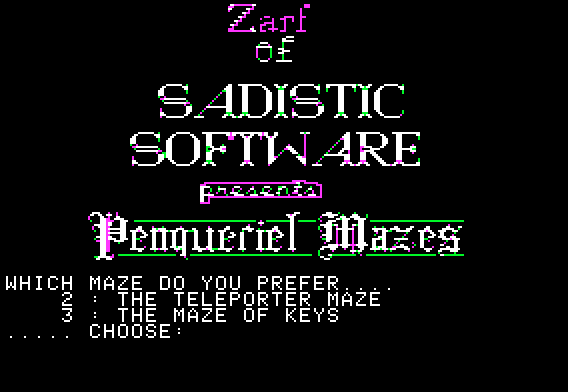