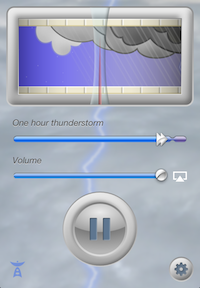 I am delighted to announce Pocket Storm -- a generative audio environment for your iPhone, iPad, or iPod touch. Pocket Storm is my first Boodler project for iOS.

It starts with a calm summer night. Soon you'll hear thunder in the distance, then wind and a spatter of rain. After half an hour you'll be in the thick of the storm. By the end of the hour it will have faded into the night again. Then the cycle begins again.

The Pocket Storm is not like other environmental audio apps. Every thunderstorm is different! Wind, rain, thunder -- even chirping crickets -- every sound is chosen from a library, with subtle variations of pitch and timing. The Pocket Storm weaves these elements into a tapestry of sound which will never repeat.

Here's my Pocket Storm web page; or snarf it straight from the App Store.


Boodler is an open-source soundscape project which I invented years ago. Boodler is designed for any kind of complex audio environment -- weather, traffic, alien worlds -- but I've never developed it as it really deserves. The Pocket Storm is my first attempt to bring Boodler to a consumer audience.

Rather than trying to sell a complete "Boodler for iPhone" app, I'm taking the approach of do one thing, very well. So Pocket Storm is a one-hour thunderstorm, which plays as background audio. Or you can stream it to AirPlay. You can set the timing as desired, or adjust the weather manually. There's also a timer option, if you want to go to sleep to it.

Audio samples from Pocket Storm, at different stages, are posted on the web site.

Owen Williams created the first Boodler thunderstorm soundscape, more than a decade ago. My app doesn't use his code, though, nor the old Boodler sound samples. I've built an all-new thunderstorm -- or rather, a set of thunderstorm variations -- using sounds from the Freesound.org project.

The sound libraries that I've compiled for Pocket Storm are now posted on the Boodler web site. (They're all Creative Commons Attribution, Sampling Plus, and Zero licenses.) The agents (source code) that assemble the sounds are not currently available; as usual, I'm trying to find a balance between open-source work and secret sauce. But you are, of course, welcome to compose your own Boodler thunderstorms from these sounds, or use Owen's original.

(Speaking of which: a percentage of the App Store revenue from Pocket Storm will be donated to the Freesound project.)

Looks good so far: a delightful wallpaper for the ears, for those who are into that sort of thing. But if you decide while a storm is in progress that it isn't quite right, is there a way to produce a change in the weather?
Andrew Plotkin (Sep 6, 2012 at 9:08 PM):

(Nicely put.) Yes; if you pause the sound for a moment and then unpause it, it will start a new "track" and randomize the sound choices.