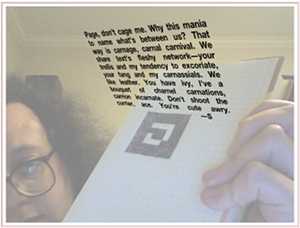 Today I went to a presentation by Amaranth Borsuk, a poet who plays with "textual materiality" -- meaning, if I can give a biased summary, the study of the user interface of text.


Back in my season of IF interviews, a few months ago, I was asked about my influences from outside the game-design world. I said:

...Diana Wynne Jones describes the fantastical by grounding it in the reader’s unconscious knowledge of the real world. I try to do all these things. (-- interview in Black Clock, Jan 13, 2011)


I learned on Saturday that Diana Wynne Jones has died. She has been ill for a couple of years now, a fact that I kept remembering and then thrusting from my consciousness. Such things make no sense. She has been in my library and in my head for three-quarters of my life; I might have been ten when I stumbled into Dogsbody. I might have been younger.

More and better writers than I are writing remembrances this week. I can only say that on my shelf of most-important books, The Homeward Bounders and Fire and Hemlock and Archer's Goon are untidily lined up.

Diana Wynne Jones insisted on the rough, solid, believable, ordinariness of life -- and that includes life lived in Elfland, life in a walking castle, life at a science fiction convention, life in the future or past or outside of time. All of these are as solid as the house you grew up in, or the time your brother pushed you into the snow, or the butter pies you dreamed of eating. Fantasy has moved on to boy wizards at school (really?) and heroes who turn into wolves (really?), but Diana Wynne Jones just kept telling us how to do it, over and over.


Enjoyed the train ride down to Philadelphia. Met up with Will Hopkins, who arranged this whole shebang on behalf of the Swarthmore Psi Phi Club and the Forum for Free Speech. (Free Speech? I don't know, I just get on the train.)

On Saturday afternoon I gave a somewhat-extended (or maybe just rambling) version of my Writer's Guide to IF talk. A bunch of us then chatted about IF over lunch, broke for a few hours -- Swarthmore has a darn lovely campus to wander around on -- and then I went to dinner with Psi Phi. I can only say that campus geek societies are all the same, but each is the same in its own unique way. Psi Phi conducts annual pterodactyl hunts. You might want to look into it.

In the evening we set up to play Slouching Towards Bedlam by Star Foster and Daniel Ravipinto. Two hours of group play got us through nearly all of the plot exploration. It so happened that the players managed to get killed right then, triggering one of the game's endings, so I called time. I figure it's better to leave people interested in exploring the other game options. Plus, two hours is a while.

If you missed this event (and, really, most of you did) you can catch me and similar IF discussions at Balticon in May. I'll probably keep doing this sort of IF presentation in various places. Not frequently, because travel eats life, but occasionally. After Balticon, maybe somewhere in the fall.


I played Life Flashes By last year, when the first public release appeared. The author had previously demoed the game at the IF gathering at PAX Prime in Seattle, so I'd already seen a "middle" chapter of the work.

I didn't write anything at the time, because I am lazy and then because Emily Short wrote a column that was more perceptive than what I was thinking. However, now it's been another few months; Life Flashes By has circulated around the various gaming communities and been discussed some; it's been featured in the recent IF Demo Fair; and Deirdra Kiai is declaring a full, final, let's get this thing on the road release. (Available as free download or collector's edition.)


I wrote a whole lot about last year's PAX IF events, because that was my first PAX and everything was exciting and new. Now it's my third (two in Boston, one in Seattle) and... everything is ho-hum and tired? No. It was an exciting weekend. But I may gush less about it this year.


I am not at GDC right now (although Emily Short is, and many other game designers I know or know of). Drat.

But if you're the sort of person who wants to meet me in person, you can visit the IF events at PAX East, March 11-13. I've already posted about that, so there you go.

Moving on beyond PAX (hard as it is for me to think about that): I am speaking at Swarthmore College on Saturday, March 26th. (In the afternoon sometime -- not yet determined.) I will be talking about IF for writers, and also doing a very fast introduction to Inform 7. Then in the evening we'll have a group IF play event. Thanks to Swarthmore Psi Phi for inviting me.

And finally -- well, finally for this update -- I will be attending Balticon, May 27-30. I haven't seen the final schedule, but I believe I'm doing the IF-for-writers talk again, moderating an IF panel, and hosting a group play of Heliopause.

The IF Theory Reader


A project born in the shadowy depths of IF history has suddenly breached and flipped its tail gaily in the sunlight.

The IF Theory Reader was conceived back in 2001, by Emily Short and Dennis Jerz. They collected a stack of essays from various people active in IF at the time. But the project fell victim to life-scheduling issues, and it sat on the shelf for (if you can imagine such a span of time) ten whole years.

This past fall, Kevin Jackson-Mead volunteered to take over the project, and Things Began Happening. He dusted off the old essays and began contacting the authors. And now -- to cut a great deal of editing work short -- the IF Theory Reader is available as a free PDF download. (Or, if you are attached to the smell of paper, you can buy a POD volume from lulu.)

So is it worth reading dusty IF history? Well, I haven't read it yet. But I can say that the book really represents a tour through the past ten years of the IF community's thinking. Some of the essays are from 2001; some have been revised for this edition; some are brand-new. Many have been published in other forms, so if you've been devouring our blog posts and essays for the past few years, you will see few surprises. But if your awareness of IF dates from the last century -- or if you've been following us only casually -- I think this book has something to offer.

For the table of contents, read on.