I recently read Tony Bourdain's Medium Raw, which was a fascinating look into the world of people who are really, really interested in food. I like food. These people think about food more than I do. So much so that I can barely understand their explanations.

At my first meal at Momofuku Ssäm, one particular dish slapped me upside the head [...] It was a riff on a classic French salad of frisée aux lardons: a respectful version of the bistro staple -- smallish, garnished with puffy fried chicharrones of pork skin instead of the usual bacon, and topped with a wonderfully runny, perfectly poached quail egg. Good enough [...] But the salad sat on top of a wildly incongruous stew of spicy, Korean-style tripe -- and it was, well, it was... genius. Here, on the one hand, was everything I usually hate about modern cooking -- and in one bowl, no less. It was "fusion" -- in the sense that it combined a perfectly good European classic with Asian ingredients and preparation. It was post-modern and contained my least favorite ingredient these days: irony. [...] But this was truly audacious. It was fucking delicious. And it had tripe in it.

Mind you, the whole book isn't like that. Bourdain talks about everything from hamburgers, to fatherhood, to foie gras, to the Food Network, to the stupid things he wrote in his first book. But that paragraph in particular grabbed me because I have no idea what he's talking about. I can look up the recipe (frisée lettuce with hot pork, vinaigrette); maybe I've even eaten it somewhere. I've eaten spicy Korean stews. But why is this ironic? Or audacious? What is it reacting against? What are the things it is reacting against reacting against? If I'd been sitting next to Bourdain, eating off his plate, I still wouldn't have a clue.

I recalled this paragraph on Sunday afternoon, sitting in an MIT auditorium, listening to the designers of the 2011 Mystery Hunt talk about their puzzle structures. I knew exactly what they were talking about. I'd just lived through it (or half of it, anyway, since I got two good nights' sleep during the Hunt.) Everybody in the room was smiling and nodding along to the speaker's presentation, and laughing at the jokes on the slides. This was our field. This was our side of the wall. Tony Bourdain would have been completely befuddled, see?


Last March, we at the People's Republic of Interactive Fiction busted our brogmoids to run a series of IF events at PAX East. We ran an IF Hospitality Suite throughout the weekend; it turned into a sort of IF mini-convention within PAX. (See this post from last year.)

Following that success (and a similar event at PAX Prime in September), we are once again making plans for PAX East 2011.

We're still setting things up. But it looks like we're going to have two rooms this year, in the Westin Waterfront hotel. (That's adjacent to PAX's new convention center.) We'll have the now-standard IF Hospitality Suite, open noon-midnight Friday, noon-midnight Saturday, and noon-3pm Sunday.

We'll also have a function room in the Westin -- not as large as the PAX function rooms, but big enough for a decent crowd. (Thanks to Dave Cornelson for arranging this.)

How to write a touchscreen adventure game


First-person graphical adventures -- Myst -- have become hugely successful in the past several years. Yes, even as Cyan Worlds and Presto Studios and such dinosaurs have withered in the frost. What are popular today are the tiny, casual, unbeautiful and narratively-barren games we call "room escapes". They're written in Flash, and they pour by the dozens out of our web browsers. 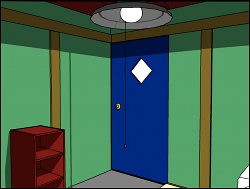 (Of course, some are huge, some are hardcore, some are lovely, and some are rich story-worlds -- I don't have to link examples, do I? That's not the point. The escape genre has conventions, and they're not trying to live up to what we thought all graphical adventures would be like from 1994 onward.)

When I got my iPhone, I thought "Room escape games! Perfect! Little puzzle environments to explore while riding the subway to work." (This was when I rode the subway to work.) I looked through the nascent App Store, and found... a couple. There was no easy porting path for existing games, due to the whole Flash situation, and only a couple of developers were writing for iPhone directly.

More room escapes have appeared in the past two years, but it's still not a big corner of the App Store. More important: none of the games, as far as I've researched, have really thought about the iPhone (touchscreen) interface, and what it means for first-person graphical adventures.


I'm not going to be posting week-by-week status updates here. (For that, read my "progress" tweets on @zarfeblong.) But you get one special one tonight. The new year has reached its Mondayness, so you're probably wondering if I am officially In Gear.

Answer: yes. I spent the end of December more on slacking than designing. That phase is over. Here's what the beginning of January has looked like:

Expect more of the same in the weeks to come.