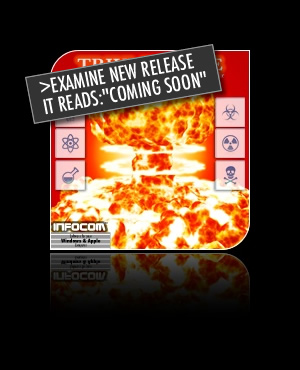 An awfully convoluted tail, is it not? I'd be interested to see if the Brawndo guy does anything with the trademark (other than be a troll with it).

And coming back to this months later, I guess that fell through, huh? Thing is, guy's got to do something with the trademark otherwise he loses it. And who'd want someone like Malinche owning the trademark?
Andrew Plotkin (Nov 18, 2010 at 11:22 PM):

I assume you're referring to the fact that Klaeffling's infocom-fiction.com domain now shows a "not available" error.

The trademark was out of his grasp long before we noticed this stuff. As for whether it fell through, well, it's been another eight months since he put the site up. I don't think anybody expects a game to materialize now. But if he surprises us, it would be good news.

Nobody's trolling that I'm aware of. I mean, the worst thing that's happened to the Infocom trademarks in the past few years is Activision's licensing "Zork" to that casual-MMO company, which was completely legitimate; it just produced a game that bored me.
Sslaxx (Nov 23, 2010 at 5:13 AM):

So...I grew up on Infocom games & feel kinda....well, sad/angry? (not really ANGRY angry, mind you) that the Infocom name has been passed around/kicked around a bit. I mean..the name is a pretty big name in gaming history. SOMEone who had something to do with stuff back then should own it.

I mean, it just doesn't feel right that someone who had nothing to do with the great games Infocom put out back in the day is just sitting on it and doing nothing of any real merit with it.

Text based games helped me learn to read, they helped me fall in love with reading, in fact. They're the reason I love writing, too. They helped me escape from all the bad crap I went through as a kid. That meant a lot to me then and it would mean a lot to me now to see the Infocom name owned by someone who will appreciate it.
Andrew Plotkin (Jan 12, 2013 at 5:35 PM):

If the trademark were owned by an IF author or fan, would you even know the difference? I don't expect it would magically cause any new games to happen.

Activision just re-released the games for iOS, using the title "Lost Treasures of Infocom". I can't see how that would be improved by a legal fight over it.