This past weekend, Boston hosted Mysterium, an annual convention of Myst fandom. I attended -- my first time -- and I had fun.

Mysterium is the small end of the con scale; I believe about fifty people showed up this year. (In a week I'm off to Worldcon, population circa 5000.) What do you do with fifty gamers in Boston? The answer, it appears, is to caravan them off to play Tomb.

Which is what this post is really about. No, I'm not going to blog about the salacious details of Myst fandom at play. There were chocolate chip cookies, let's leave it at that.

Tomb is a thing. It's this -- thing. Ummmph. Nobody has a name for what Tomb is, because it's the first one. It's the lineal descendant of a cornfield maze, by way of Myst and out of a LARP -- but not so much real live-action role-playing games, as the SF version envisaged by Niven and Barnes in Dream Park.

(Can I suggest "live-action interactive fiction"? That term makes sense if you know what IF is... which, okay, makes it a terrible term. Skip it.)

Anyhow, I don't think it's an accident that Tomb's logotype is a direct swipe of Zork.

Here is what Tomb is. After a brief orientation, you walk into a plaster-and-styrofoam Egyptian tomb. The door grinds shut behind you -- oh no! The Pharaoh's spirit speaks! He challenges you to solve his riddles or die!

That's what it is. You are in an immersive fantasy environment -- stone walls, mysterious lights, sound effects, glow-in-the-dark symbols, fog. The construction will immediately remind you of a theme-park ride, except for two small details: you're not riding anything, and it's interactive. Solve the puzzles and you'll discover the secret of the Pharaoh's tomb. Fail, and -- well, I don't know; we didn't fail. Hah. But I'm told that you undergo a horrific death and leave through a side door. Feel free to buy another ticket and try again. 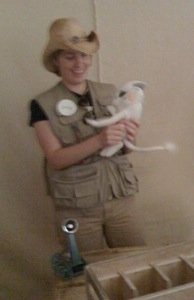 Your group has a guide. (Our guide, Squ'ee, is shown here dealing with her sudden induction into Myst zoology.) The guide is responsible for herding you through doors, making sure you don't miss anything really obvious, and nudging you along if you seem to be stuck. A run is scheduled for 45 minutes -- it's in a sequence of rooms, so they can start a new batch every 15 minutes.

I was impressed by the interactivity. It is, literally, hands-on; you are always feeling at tiles and buttons and moveable panels. You make things happen. There are some narrative tricks and traps, which I would never be so crude as to give away, but they were nicely designed; I felt like I was the one things were happening to.

Many of the story events, such as the Pharaoh's voice, are pre-recorded. Others, as I said, are the guide telling you what to do. Interestingly, the pre-recorded ones had better pacing. At several points I thought the guide was too pushy -- pointing at the next puzzle before we realized that we'd solved the last one. The sense of triumph got stepped on. On the other hand, we didn't solve any puzzles purely by luck; so we got to feel triumphant anyhow.

And how are the puzzles? This thing has been open for four years, and I've been living in Boston for three. I never visited until now, because, honestly, I heard the puzzles were kind of lame.

Which they are, to a puzzle devotee. Tomb is built to be solved by most people -- not just by most gamers. If you've played three computer adventure games, you've seen most of Tomb's puzzles already, or puzzles much like them. (I believe we won in just over 30 minutes.)

But -- I had a good time anyway. It's a social puzzle game, and that's more fun than sitting at home alone. You win or lose as a group. The puzzles are built as group activities. Even a puzzle that you've seen fifteen times before, which you can solve as fast as mouse can click (and I think you know which puzzle I mean), turns into a party game when the guide tells you to line up and make one move per person. Much cheerful yelling ensues.

So, go with friends. I think they aim for ten people as the average group size. If you show up with twelve, you can reserve a tour all by yourselves; if you have fewer than eight, or it's crowded, you could get mixed in with strangers. I recommend not being mixed in with strangers. (The Myst group wound up being split into three tours of about fifteen each, which really was too many. Small rooms were crowded, and some people wound up on the sidelines of any given puzzle.)

Moral and physical health guides: Tomb has darkness, fog, and bright flashing lights. Not strobe-flashy, but sensitive brains might still want to avoid it. Also, at one point you're exhorted to stand around chanting "All hail Pharaoh!" In good fun, but it was a bit of a "you know, this really is against some people's religion" moment. I promise that neither your guide nor your teammates will mind if you chant "Whatever, Pharaoh" instead.

According to the web site, the operators are planning to swap out Tomb for a new, spy-themed adventure "in 2008". I have no idea if they're on schedule with that. I hope so, because I want to do another one.

The Staff said they were moving to another area of Boston (bigger location) and would possibly still have up Tomb while they had the new spy-themed "attraction"...that's supposed to be later this year, no idea when tho, they didn't say.

Ah, so you actually talked to them. :) It's these little journalistic tricks that I keep missing out on...

I was just looking at the web site FAQ, and it's not clear how out-of-date that is. Thanks.